Guidelines to Ward off the Onset of Dementia

Contrary to popular belief, the terms “senility” and “dementia” are not inter-changeable. Dementia is basically a condition used to describe a set of common symptoms that manifest in the form of cognitive degeneration. These could include memory loss; inability to process information quickly and communicate or an overall reduction in reasoning and language capabilities. Mild age-related cognitive decline in fact occurs to most of us, normally resulting in some forgetfulness. However, the signs of Alzheimer’s disease become all too apparent when the symptoms become severe enough to become detrimental to everyday life. This is the most well-known form of dementia, and people can have a genetic pre-disposition to it. Other forms of dementia may be caused by injury, stroke or deficiency of essential nutrients like Vitamin B12. While it is not possible to reverse the death of brain cells or neurons, which is what happens in all cases of dementia, there are some lifestyle changes and measures we can take to at least delay the onset of dementia not caused by injury. Listed below are some of the most significant ones: 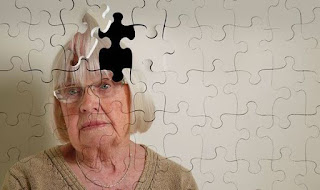 Clichéd though it may appear, this guideline heads the list for good reason. A general thumb of rule most health practitioners agree with is that what’s beneficial for the heart is also likely to be good for the brain. Smoking is known to cause nerve damage and definite loss of brain tissue, as is excessive alcohol intake.

Sustained efforts to keep healthy or at least controlled levels of blood sugar, blood pressure and cholesterol are bound to help brain function as well. All these conditions can lead to insufficient oxygen supply to the brain as a result of harm to the blood vessels over a period of time. This in turn speeds up the damage and destruction of brain tissue, which is what causes vascular dementia.

This is just another way of emphasizing the importance of exercise, both physical and mental. Ever wondered why a lot of retired people like to join chess clubs, play bridge and solve crossword puzzles? Well, there’s sound wisdom in indulging in these activities. Just like our bodies require exercise for better metabolism, lymphatic drainage and heart health, brain cells also demand a good degree of stimulation so as to remain “ticking”!

Studies indicate that nurturing relationships, reaching out to people and having at least a moderate level of social interaction are all ways and means of contributing to improved brain function. Loneliness is a big factor in leading to depression & anxiety, which in turn do significantly increase the risk of emotional and behavioral problems associated with dementia.

A healthy diet comprising the right balance of essential nutrients goes a long way in contributing to brain health. Parents who are trying to instill a good dietary routine for kids are actually doing their bit to stave off dementia many decades in advance! Fruit-and-vegetable rich diets, with good proportions of omega-3 fatty acids, minerals and proteins are beneficial for overall mental and physical health.

Studies seem to suggest that healthy doses of Vitamin B12, B6 and folic acid, often obtained from physician-prescribed supplements, can contribute to maintaining optimal brain function. This is because they are thought to lower the pace of brain atrophy, especially amongst ageing people.

Article is Published by Om Prakash on behalf of mChemist, mChemist is the first fully legal online pharmacy in India. It provides authentic medicines only for the written prescription from legitimate doctor. mChemist is functional online medicine service that along with medicines avail protein supplements and healthcare devices for purchase.