Summary: Silvassa is a significant city in the Union territory of Dadra and Nagar Haveli. It is the union territory’s capital, and is the most industrialized city in the region. Bestowed by great past and also by the best of nature, the city is also a popular tourist destination in the region. Visit the city to explore all aspects of it, and for accommodations choose from the best hotels in Silvassa.

Body: Silvassa is a small city and is situated in the Union territory of Dadra and Nager Haveli. In fact, the city is the capital city of the union territory and is home to the headquarters of administration. The city is also a major industrial hub, as the city is rich with natural resources. The city is perhaps the most industrialized cities in the region and is home to a mass of industries. The most significant ones include: Gensets, Chemical, FMCG, electronics, Paints, heavy engineering goods, and insecticides. All the large and most profitable firms and companies like, Hindalco, Castrol, Blue Star, Dabur, Hindustan Unilever, Reliance Industries, etc. have their plants and factories established here. As much as these industries have helped to grow the infrastructure of the city, the equal amount of rewarding opportunities is being created by the industries. This in turn has attracted people from all over India to the city, thus also helping the city to become a melting pot of people, culture, tradition and religion. 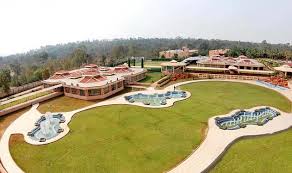 Even today, when several industries and factories exist and operate in the city, most parts of the city are still capped with the everlasting jungles. It is these densely capped forested landscapes and the raw wildlife of the region that beckon travelers from all over India to visit the city. A trip to the city is simply an overwhelming experience. It is a bliss to the nature enthusiasts. The city is home to the Warli Tribal Culture that has long fascinated the enthusiasts of tribes and ancient cultures. Besides, there exist a number of excellent trekking trails, fun nature walks, and boating, etc. for the adventure buffs.

Some of the popular sightseeing places in the city that are worth checking out include: Khanvel, Vanganga Lake Garden, Dudhni, Shri Jalaram Temple, Our Lady of Piety Church, Deer Park, Vasona Lion Safari, Shiv Mandir, Dudhni Falls, Hirwa Van Garden, Tapovan Tourist Complex, and Water Sports Center, etc. The good thing is that there are many good hotels in Silvassa that offer tour services of popular tourist points. Besides, one can also hire professional tour guides.

Vapi railway station is the nearest railhead to Silvassa. It is about 17 km away. Plus, the nearest airport is situated in Mumbai at a distance of about 120 km. Meanwhile, the city has its own bus station, which connects the city to the neighboring cities and states. Plus, there also exist a few good budget hotels in Silvassa situated near the bus station.

About the Author: Atul Chaudhary is a travel enthusiast and passionate travel writer for an online travel search engine in India. Silvassa is one of his favourite tourist places. He also explore Places to visit in Silvassa , budget hotels in Silvassa and flights information.