A beautiful place Silvassa perfect for taking a tranquil escapade

Indeed, heading to a place that still retains the essence of the old world and spending a memorable vacation there, is an ideal thing to do in the upcoming vacation. Silvassa is one of the best destinations in Western India that makes a perfect escapade into the thick of forests, old culture and traditions.

The golden history of India is full of references and events where it is clearly mentioned that there are places in the country that were ruled by the British, Portuguese, Dutch, French, etc. for several decades, some even extending to multiple centuries. These places still ooze the charm of the bygone era as they were highly influenced by the past rulers. Goa, immediately comes to the mind when the talk is about the place on Indian mainland that to a large extent retains the foreign culture and feel, even after several decades of its inclusion in the Indian Union Territory. However, Goa is merely one such place and needless to say the country is full of such places.

Silvassa, the capital of Union Territory of Dadra and Nagar Haveli and a place sandwiched between Gujarat, Maharashtra, Arabian Sea, and the hilly terrains of Sahyadri Mountains, is one of the destinations where the influences of the Portuguese are still prevalent in the architecture, religion, traditions, culture, and people. In the medieval era, when the British were expanding their empire throughout the country, the Portuguese laid the foundation of the city. Silva in Portuguese means “wood” and evidently the current name of the place is the distorted version of the word. Home to very old tribes, weathered colonial buildings, and blessed with wildlife sanctuaries, beaches and fun water sports, and not to forget, scenic natural beauty, a trip to Silvassa will take you on a journey of a lifetime. If you are in Vapi, accessing the old city via roads is perhaps the best thing to do. You can hire a Vapi to Silvassa taxi and embark on a memorable journey. In fact the road trip is one of the best road trips that are fun when taken rather than left. 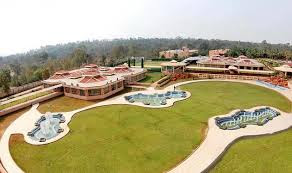 The place originally housed a cluster of 72 tribal villages and was handed over to the Portuguese following a treaty between the Portuguese and the Marathas. Take some time out of your tour and visit the quaint villages and countrysides that are situated just a few miles away from the main commercial centre. You will love to spend the time with the locals, learning the legends and their customs. It is quite interesting to see the villagers converse as they sit in their house veranda and relish smoke in their fancy smoking pipes. It is certain that the more time you spend here, the more you will get interested in learning their way of life. Silvassa is distinctively known for being the centre of Warli culture, which indeed is a melting pot of cultures as you can find the traces of Gujarati, Marathi, Portuguese, and local Christian cultures.

Some of the main tourist attractions to look forward when visiting the city are: Hirwa Van Garden, Damanganga River, Lion Safari Wildlife Park, Tapovan Tourist Complex, Khanvel, Vasona, Water Sports Centre, etc. Apart from monsoon, you can visit Silvassa anytime throughout the year. One of the best time to plan your tour of the place is at the festive time of Christmas. It is one of the best places to celebrate Christmas as there live a good concentration of Catholics, who still practice the traditions and festivals that were long established by the Portuguese.